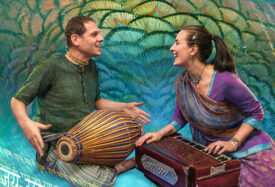 “One of the greatest new kirtan groups today… Prema Hara makes some of the sweetest Sanskrit yoga music you’ll ever hear. Their new album, Tears of Love, is overflowing with the nectar of their devotion.“

“Kamaniya & Keshavacharya Das create a kirtan experience that melts the heart and touches the spiritual Self. Their devotion is contagious and their sound is as Divine as the names of God they chant.”

Awaken the fullness of your heart with this dynamic duo who have dedicated their lives to the love of Kirtan and living that joy with others!

Attracted by Bhakti Yoga, the path of devotion, Kamaniya and Keshavacharya Das have spent many years living in ashrams, searching for the divine through devotional service and singing. Seeing the impact of chanting on people, they were inspired to commit their lives to sharing the universal spiritual practice of kirtan with the Western world.

Known for her joyful expression, Kamaniya’s love for sacred chanting is apparent. As well as leading her own kirtan for the past decade, she has accompanied eminent devotional singers such as Shyamdas, Jai Uttal, Girish, Durga Das and Gaura Vani & As Kindred Spirits.

Keshavacharya Das’ search for a deeper meaning to life led him to a little Indian town amongst shrines and sadhus, where kirtan became his life. For years as a monk his every breath was spent in meditating on and celebrating divine sound. He spent the last few years traveling across the USA performing kirtan at many yoga studios and retreat centers. Keshavacharya’s acclaimed debut album, Crying of the Soul, has become a favorite among many kirtan CD collections.

Distributed by Warner Brothers, Mantralogy is a conscious lifestyle resource delivering music, products, and transformational events that center around the growing subculture of sacred music. 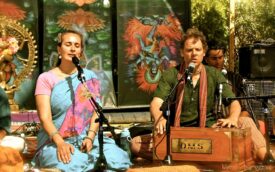